November 19, 2007
A real 'story' as told by a close friend:
"Vani was in her early thirties when I first met her in a Mumbai local sometime in the late ‘70’s. She never talked much but her helping tendency was obvious. She boarded the train at the starting point and always found a seat. Instead of sitting through the hour-long journey, she would offer her seat – a luxury - to another lady.

My acquaintance too began this way – a few pleasantries exchanged over the train’s din. After a couple of months, she was not at her usual seat. Everyone presumed that she was on leave. In the busy buzz of the Mumbai life, no one thought twice about her till she came back after nearly 4 months. None of us could recognize her. She had lost weight, her cheeks were sunken, eyes lifeless, and to top it all, she had an almost bald head.
Out came the rude shock that she had been diagnosed with breast cancer and had to undergo radiation therapy. She hoped that she had won over the disease, but even before she regained her lost strength, it was found that the cancer had spread to the other breast, and the therapy was repeated. Left with no choice, she gave up her job. Her children were 8 and 10 years old.
We all wished her well and I did not see her after that. I had moved out of Mumbai after my marriage; slowly, memories also faded away.

Sometime in 2001, while at the lobby of Panchajanyam - a guest house run by Guruvayur Devaswom Board - a lady by my side enquired if I was from Mumbai. When I said yes, she introduced herself as - Vani. I just could not believe my eyes. She then narrated her story of survival.

After resigning her job, she went through the usual process of radiation and chemotherapy. More than the treatment, the side-effects were unbearable. The family bore suffering for a year; then her husband decided that they would move back home in Kottayam, Kerala. There she underwent Ayurvedic therapy, but to no avail.

Slowly her whole body was engulfed by cancer and she was almost bed-ridden. Her one wish was to visit Guruvayur. If she didn’t make it, her son’s wedding was to be conducted there. Slowly she lapsed into a coma.
No-one knows how the topic came about, but her mother and mother-in-law sat on either side of her and continued to chant Vishnu Sahasranamam (1000 names of Lord Vishnu). They continued with faith and fervour for 7 days and nights. When they needed a break, someone else would take over. Vani slowly regained her consciousness and became aware of sights and sounds, and the intensity of their prayer. She also joined in, and continuously for a year their house reverberated with the chanting.

Today I believe, she is somewhere in Dubai with her daughter, spreading the message of her recovery and helping others as usual."
QED

i appreciate that you have some thoughts to share, and are taking the effort to do so.

Popular posts from this blog

"Did Hanuman return the mountain?" 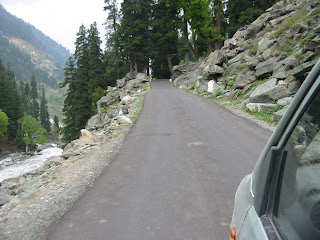 The query was popped while we were travelling in Srinagar by road, trying to have a fill of the valley's humbling views of the Himalayas all round. Here are a few glimpses of Gulmarg and Pahalgam My son's query caught us unawares, and also got us thinking about the doubt that we never raised during childhood sessions of the Ramayana epic , and I decided to call my mom, our free encyclopaedia for all things religious / spiritual / cultural. "Yes, Hanuman was disciplined, and he did return the Dronagiri mountain to its original locale". (was our spot answer) Pahalgam Back to the query - Anyone, any idea? There are several versions, all quite satisfactory, if you spare a thought. - Rumassala is one of several places identified by the Sri Lankan Tourism Department as being associated with Ramayana. Hanuman carried a part of the Dronagiri Mountain that was rich with medicinal herbs including Sanjeevani from the Himalayas to revive Lakshmana. 'When the
Read more

February 16, 2009
Granted that enough and more has been said about SM (स्ल-क in Hindi). - what the director did, and did not, - what the co-director did not, - what ARR routinely does much better (DB got his musician right), - how RP got world-recognition for his techniques, - what the media Overdid. For a very balanced take try K Hariharan's, titled 'Orientalism for a global market' . "For the majority of western audiences who are writhing under the excruciating weight of a global meltdown, a fairy tale about the ugly side of India should certainly come as an orgiastic catharsis! “Slumdog Millionaire” should be considered as one of the most gratuitous fantasies to be created about India in the 21st century. Over 200 scenes whizzing past in 120 minutes leaves one completely anaesthetised and incapable of registering the complex layers that make up the garbage dump presented in “SM” called India..... as an Indian and a Mumbaikar I am not ashamed to accept the image of slums, crimina
Read more

Sites that interest me